What Is Electrical Arcing?

What Is Electrical Arcing? 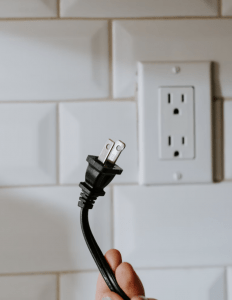 As an electrician for over two decades, I get one question asked a lot; what is electrical arcing?

To put it simple, electrical arcing is when electricity jumps from one connection to another.  At times you hear electric switches producing a sizzling/ cracking sound.

Typically, this happens when you turn them either on or off. This is known as arcing and could be a result of two things.

It could be caused by a damaged cable causing the popping sound or an arc flaw. If the cause is a damaged wire, the wiring cannot endure the current flowing, which is why the arcing takes place.

Have you ever heard of a parallel arc flow?

If you have an issue with a parallel arc flow, the current flows throughout the damaged insulation, which leads to a short circuit. The short circuit is not very potent, which is why the circuit breaker can’t identify it. In this article, is everything you need to know about electrical arcing.

Electrical Arcing could be a result of several issues in your electrical system such as;

Arcing takes place in an electrical panel after the circuits in the panel are overloaded. If a circuit breaker joins to an electrical panel bus, it could result in overheating. It can ruin the bus and the connection, rendering the equipment defective and susceptible to failure. When there is an excess current flowing, circuit breakers may not function as expected. Rather than tripping when excess currents are flowing, damaged circuits allow electricity to continue flowing, which results in overheating followed by arcing.

The conditions surrounding an electrical panel can be part of the reason for arcing and can also affect the situation’s severity.

Furthermore, using excess fuses inside the electrical box can result in an additional electricity flow via the circuitry, causing overheating and arcing. Circuits that trip or fuses that blow often can point out potential arcing risk.

Research confirms that electrical panels designed by at least two manufacturers have, during field tests, been revealed to feature flawed construction, which can cause arcing and sometimes electrical fires. JL Home Inspection maintains that the Electrical panels from Zinsco have defective circuit breaker links, resulting in the units blowing out the panel’s side casings after explosions or permit electrical flow even when switched off.

Another manufacture claimed to produce Faulty electrical panels is Federal Pacific Stab-Lok. Their electrical panels are quite infamous for defective circuit breakers, which may not trip when necessary. These failures are seen as underlying hazards, and they are not directly responsible for arcing, though they play a role in it. Most flawed panels were produced in the 1970s or before.

What are signs of Arcing?

Arcing is a type of electrical discharge that occurs when electrons flow between two conductors, usually metal, in an environment with a gas or vacuum.

The conductors can be wires, rods, or other objects that are capable of carrying an electrical current.

When the electrical potential difference between the two conductors is high enough, the electrons will flow from one conductor to the other, causing a spark or arc.

This can happen in both gaseous and vacuum environments.

Below are 6 signs of arcing:

If you notice any of these signs, it is important to contact a qualified electrician to come and inspect your home or business for potential electrical hazards.

Arcing can be dangerous and can cause fires or damage to electrical equipment.

A qualified electrician will be able to identify the source of the arcing and make any necessary repairs.

This can cause injuries such as third-degree burns, cardiac arrest, hearing loss, blindness, nerve damage, and even death.

Severe burns can occur if the victim is within a few feet from the arc. There have been staged tests that showed temperatures over 2250 degrees Celcius on an individual’s hands and neck standing near the arc blast.

The arcs spread molten metal droplets at high speed. This molten metal can be impelled for a distance of up to 10 feet. Blast shrapnel is capable of penetrating your body. The pressure waves from the blast can throw you across a room or knock you off a ladder. Even your clothing can catch on fire.  Clothed body parts can be burned worse than the exposed body parts.

How Do You Prevent Electrical Arcing?

With the proper training, equipment, and safety measures, it is possible to reduce the risk of an electrical arc. Here are the precautions to take;

It is vital to remove the potential danger as soon as possible. Try not to work on energized electrical gear and be extra careful when testing it to ensure it is adequately de-energized or when you are re-energizing it. Utilize remote racking tech to control circuit breakers while you are outside the arc flash margin rather than letting your personnel be at risk.

Collect information about your power distribution system and have protective device dexterity, and do research on the short circuit to know more about the arc flash classifications for electrical equipment. This will help you reduce the chances of short circuits and arcing. What’s more, find out about technologies like arc reducing fuses, and remote racking gear, which is handy in keeping the property and personnel safe.

Find out the proper PPEs needed depending on the flash hazard classification, and make sure the personnel and the property are well-equipped. Re-plan your gear to achieve optimal engineering controls, which aid in preventing and reducing risk. Modify the circuit breakers` and power distribution systems` settings where necessary.

Besides being authorized by regulatory bodies like OSHA, safety training guarantees your personnel grasp the consequences of not being careful and follow the required safety measures all the time. This will help them if there is an arc flash and in knowing how to reduce the risk.

Pinpoint the risks, use appropriate PPEs, and establish arc flash boundaries for safety in the event of an arc flash. Ensure that suitable electrical rules and work procedures are correctly documented, distributed to all personnel, and strictly applied.

Does Electrical Arcing Cause a Sound?

Electricity can move through the air like lightning from an exposed cable to another surface, and it produces a popping or cracking sound.

What Does it Mean When Your Electrical Outlets Spark? 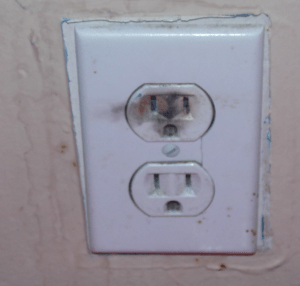 An electrical outlet that sparks may point to a short circuit, outdated equipment, or water exposure. At times it’s normal, but sometimes it shows that there is a problem with the outlet. Here’s what you should know about sparking electrical outlets;

If an outlet sparks shortly and infrequently, then it may be typical and safe. However, if it sparks each time to try to plug something in, you might have a problem.

When Should I Call an Electrician About Electrical Arcing?

When you start to hear buzzing or cracking sounds, or other noises from your electrical system, it is time to call your electrician. Things such as loose cables, overloaded outlets, or loose connections can be the reason why you hear these strange noises. Most of these circumstances will result in your electrical system arcing or causing weird noises and other electrical issues such as outlets, sockets, or appliance stop functioning.

If you ignore these warnings, it could cause more damage to your electrical system after a while and, at times, electrical fires. To sum it up, if you hear a buzzing sound call an electrician immediately.

Electricity is useful, and at the same time, dangerous and electrical systems are complicated. Electricians know how electricity operates, how electrical circuits flow, how they interrelate with each other, and how to handle them safely. When you have electricity issues, it is safe to have a professional come to your home and have him handle it. Many electrical problems can be solved easily if detected early.

For more great blog posts like this, bookmark AC Electric!