How to Put Out an Electrical Fire

How to Put Out an Electrical Fire! 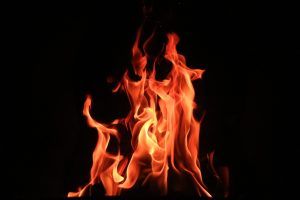 Are you trying to prepare ahead and learn how to put out an electrical fire?

Electrical fires are the leading cause of residential fires that result in catastrophic loss.

If you and your family do not have an escape plan in place, now would be a good time to do your homework, come up with a plan, and put that plan into practice.

What Happens When You Put Water on an Electrical Fire?

Since water is such a good conductor of electricity, it stands to reason that water should never, ever be considered as a way to put out an electrical fire.

You are dealing with a fire that can get out of control in the blink of an eye. Don’t use water at all, no matter how out of control the electrical fire gets!

Using a Fire Extinguisher to Put Out an Electrical Fire

If you have a fire extinguisher in your home, there are a few things you should know before attempting to pull the pin and squeeze the trigger.

The letter ‘C’ in the rating means the extinguisher is loaded with powder that can successfully put out your electrical fire.

The powder is a mixture of sodium bicarbonate (baking soda) and monoammonium phosphate which can smother the fire without conducting electricity like water does when thrown on an electrical fire.

Can Flour Be Used to Extinguish an Electrical Fire?

If you can’t find anything to extinguish the fire, throw baking soda at the base of the flame.

If the fire is in your kitchen, do not throw flour on the blaze! A canister of flour can usually be found in any kitchen, but flour is considered to be a conductor of electricity as well as dubbed flammable.

There have been reported incidents where flour was tossed on an electrical fire resulting in a large fireball that can allow the fire to get out of control rather quickly.

Stay Calm, Move to Safety, and Call the Fire Department

If you experience an electrical fire, cut the power in the main breaker panel to eliminate the flow of electricity into your home.

If you can’t get to the panel, remove the plugged-in appliance that has caused the fire. 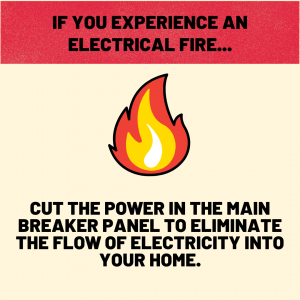 If your electrical fire is inside your breaker panel, or a wall in your home, remember to stay calm, get everybody out of the home, including your pets, and call the fire department as soon as possible.

If you don’t have a fire extinguisher in your home, now would be a good time to begin thinking about installing one or two around your home.

Most, if not all, major home improvement stores and big-box retailers have small home fire extinguishers for sale.

Just remember to get one with a class ‘C’ rating, or a multi-purpose extinguisher that is rated ABC for other types of fires that could potentially ignite.

Above all, put an escape plan in place for your family to follow in the event of any type of fire in your home.

For more electrical tips, make sure to stay in touch with AC Electric.