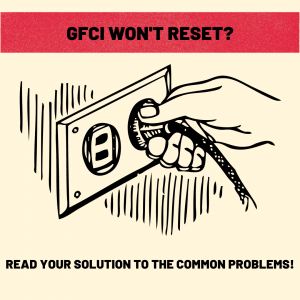 No need to worry!

Read this article to discover your solution to your GFCI problem.

The Ground Fault Circuit Interrupter (GFCI) outlets in your kitchen, bath, and utility rooms were installed in those locations because they are considered to be ‘wet’ locations in which there is a water source in those areas.

The GFCI outlet is a safety device that will shut off the power to that outlet in the offense of the ground circuit being interrupted for any number of reasons; the presence of water in the circuit is the primary one, and the high risk of someone being electrocuted as a result of the outlet’s protection has failed.

If the problem has been corrected and you are now ready to restore power to the GFCI outlet, all you need to do is press the reset button on the outlet.

In this post lets look at a GFCI that won’t reset, what the problem may be, and thoughts on repairing a faulty GFCI outlet yourself.

Why Would a GFCI Outlet Not Reset?

Many pre-1990 GFCI outlets would allow you to simply reset the outlet by pressing the reset button. Even if the problem was not identified and corrected you could restore the power, creating an even more dangerous scenario.

After 1990, Leviton, an electrical device supply manufacturer, began producing a GFCI outlet that would perform a test of the circuit’s ability to be interrupted if the ground fault had failed.

If you have a GFCI outlet that will not reset, it is because the outlet’s ability to protect you from electrical shock has failed and the outlet must be replaced. The post-1990 GFCI outlets from Leviton could test the circuit and prevent any power from being restored to a faulty outlet.

If there are additional outlets installed on the same circuit as the GFCI, once the interruption causes a failure, no outlet downline from the GFCI will operate as well.

Is My GFCI Outlet Bad?

If your GFCI outlet will not allow you to reset it to a powered condition, the protection element of the GFCI has failed and therefore has left you with a faulty GFCI that needs to be replaced.

If your GFCI will not allow you to press the test button, as you should every month to test the protection of the outlet, it should be replaced promptly.

What to Do If Your GFCI Has Failed

If the protection element of the GFCI has failed and needs to be replaced, do not allow anything to be plugged into the outlet. You can cut the power to the GFCI circuit at its corresponding breaker in your electrical service panel. This will keep any inadvertent activity from causing further issues with the circuit.

If you are not sure how to turn the breaker off, place some tape of some kind that will alert anyone not to use the outlet until you can get a qualified licensed electrician to replace and test your GFCI outlet.

Can I Replace a GFCI Outlet?

If you are a savvy DIY’er and you feel right at home replacing a standard electrical outlet, it is still highly recommended that you consult a professional licensed electrician when it comes to any facet of your GFCI circuitry.

GFCI outlets are not your typical black to black, white to white, and green to ground type of installation. GFCI outlets need to be wired according to the line and load of the circuit and therefore should be left to the experts.

For more solutions to your electrical problems, make sure to bookmark AC Electric!