What is a Power Surge?

What is a Power Surge?

What is a power surge and how can you protect yourself from one?  At least once a week, AC Electric receives a call on potential power surges issues.  The best way to explain a power surge is when a there is a higher than normal amount of electricity going through than normal.  For example, most US homes have a 120V outlets.  If a 120V outlet has 240 volts of power going through it, that is considered a power surge.   Some surges can be small while others can be large and damaging to appliances and other household items plugged into the outlet.

What Causes a Power Surge?

Power surge are caused by internal and external sources.  Some of the external sources can be from animals getting into transformers, trees falling on or touching live electrical wires, lightning strikes, and other causes by nature such as tornados.  Some of the internal causes of power surges can be caused by appliances.  You may have even noticed that when you turn a vacuum on or off that you get a power surge.  Many of our customers call us after using their vacuum and it caused one particular part of their house to lose electricity.  Usually this can be resolved by checking your circuit breaker to see if it has tripped.  If your circuit breaker has tripped, just simply turn it back on and retest that area of your house to make sure your electricity is back on.

What are Signs of a Power Surge?

There are a few signs that can almost guarantee you that you have had a power surge.  Below are common signs of a power surge:

What is a Power Surge Protector? 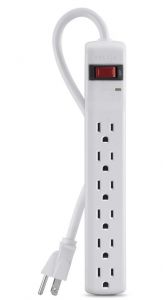 Who Pays for Power Surge Damage?

If the damage caused by a power surge was done due to the negligence of a utility company then the electrical company is typically held liable.  It’s always best to contact your state for extra advice based on where you are located and if need be a lawyer.  Every state has different laws when it comes to who is personally held liable for power surge damages.  Often times, you may find that your home owners insurance will cover damaged items due to power surges.  It may be best to call your insurance company to find out what your next steps would be in your particular situation.

How Do I Protect Myself from a Power Surge?

If you have any questions about protecting your home or office from a power surge, give AC Electric a call today!